7spell is scientifically designed, and utilizes principles based on decades of research in learning, retention, and psychology. Here is a summary of the theory and research behind 7spell's effectiveness.

In this seminal study performed at the University of Toronto, Canada, the authors performed a series of tests in which they gave the study participants a sequence of words to learn, with information related to each word as it appeared in order. They discovered that when the information provided stimulated the participant's brain to process the word on a more involved level (referred to as "deep encoding" or "degree of elaboration" in the study), that word was more effectively learned and remembered. With 7spell, the user is given a wide range of additional information about each spelling word, including the word's definition - one of the key factors in enhanced memory, according to this study - as well as usage examples, synonyms, and antonyms.

Each person is influenced by a unique set of factors related to their own status and progress towards goals, but is also affected to a greater or lesser degree by the achievements and perceived standards of the people around them. This analysis of past and current studies looks at the way people view and are motivated by individual goals as well as societal achievement (competition). The authors conclude that effective use of motivational strategies must take both into account. This is something that 7spell accomplishes by providing each user with the ability to set personal goals, earn reward points, and view their own progress tracking reports, and also to publish all of those results on public social media platforms.

In a study focusing on the influence of reward-scheme programs on behavior, the authors found that when people see visible progress towards their goals they are more likely to increase the activity required to reach those goals. The study also confirms that most people are also motivated by receiving rewards for completing specific activities, even if those rewards are not immediately transferable to actual material or monetary benefits. Status points, rewards, and real-time progress tracking are all methods used in 7spell to encourage frequent spelling practice by awarding points for the completion of exercises and activities. Because the user can access their progress charts at any time, they will always be able to see how close they are to achieving their personal spelling goals.

Instrumental learning, also called "operant conditioning," is a method by which behaviors are learned in connection with a stimulus, a reward, or both. In this research done at the University of Vermont, the authors studied the ways in which the information connected to a specific behavior is retained when the stimulus is removed, and how subsequent repetition or reward reinforces information recall and a resumption of previously learned behaviors. They conclude that there are two primary methods of reinforcing active memory and behavior: by creating a different way to test the subject's memory, and by providing the opportunity for intensive focused repetition of that stimulus-behavior response. These two methods are widely used in the 7spell activities and games to create the link between instruction and memory that is so crucial in effective spelling learning on the student's part.

In this study comparing long-term and short-term memory, the study authors tested the neural activity of participants as they memorized a set of images. Half of the study participants used massed learning techniques, in which each new image was presented multiple times in a row; the other half were given the images in a spaced repetition mode, where the images were shown in alternating order. Although each participant saw each image the same number of times, the people in the spaced-repetition exercise were able to accurately remember more images, and for a longer period of time. Repetition is a key technique in learning spelling, and 7spell incorporates spaced repetition in two ways. First, the system uses randomized selection of spelling words from the user's current list to populate the activities and exercises, ensuring an interval between word reviews. Second, the system's Word Discover feature provides pop-up instant review of the words on that list, again in random order. By providing users with multiple opportunities throughout the day to read and review their words, 7spell provides all of the benefits of the spaced repetition methodology in its spelling instruction.

Spaced repetition is a memory training tool that relies on frequent and consistent review of information; mnemonics is a memory technique that involves multiple ways of looking at that information, such as the incorporation of images or story lines. Researchers at Carnegie Mellon University focused on the combination of spaced repetition and mnemonics in evaluating how best to train people to remember specific pieces of information: computer passwords. They found that by combining the two methodologies, the results in both ease of learning and retention were increased. 7spell uses each method separately and together to help users learn and remember new spelling words by using the same words in multiple exercises, presenting spelling words in a variety of formats, and encouraging users to add information related to each word to make a personal connection that helps them to remember that word and its correct spelling.

Great spelling is not just about getting high grades, lovely report cards, and academic awards. It’s also about confidence and empowerment. When your child can spell well it gives them self confidence. It feels great to be ahead with an essential skill, and fully prepared for success in all other areas.

Kids who can spell well have more confidence, are happier at school, and improved results in all areas.

Great spellers get great grades, because spelling powers all school work, especially in the earlier years.

Focussing on the right spelling list saves time and triples the effectiveness of study. With 7spell, you can quickly enter a class list or get shared lists from your friends and teachers. Or to get started quickly, why not use one of 7spell’s expert lists, perfect for any level, grades 1 to 10.

Create Spelling Lists
Quickly make your own lists from any word in the massive 142,647 word database.

Expert Lists
7spell comes with hundreds of grade-boosting spelling lists, created with the input of over a dozen experts.

7spell includes 10 FUN games and activities that make learning any spelling list a breeze. And they really work! The games are based on sound evidence-based educational principles such as levels of processing, operant conditioning, and spaced repetition. 7spell is effective AND fun!

Fast Results
Kids improve quickly because they love the games.

Evidence Based
Based on sound evidence-based principles, the games really work to improve spelling.

Any Spelling List
All of 7spell’s games, features, and exercises work to teach any spelling list – even your own.

The Science Behind 7spell

With 7spell, you can see your child improving – and they can see it too. You get detailed reports on spelling improvement, time used, and more. The result is a deep sense of satisfaction. When kids see their improvement, they feel motivated, confident, and happy. As a parent you just feel proud.

Track Improvement
The progress tracking allows you to see improvement. Kids are motivated, parents are proud.

Track Usage Time
See exactly how much time your child is spending on 7spell. Be amazed that such a small amount of time translates into a measurable boost in grades.

Detailed Reports
See detailed reports on exactly how your child is using 7spell.

7spell includes many of the same social and game-like features that keep kids going back to social media and games. But instead of wasting time on Facebook or playing useless games, they are learning to spell like champions. With 7spell learning is fun, social, and effective.

Stay In Sync
7spell automatically keeps everything in sync across all your computers, even different platforms.

Learn In Groups
Kids can share wordlists with friends, parents, or classmates, and work on them together.

Print Worksheets
7spell can print worksheets and activities based on any spelling lists. Even print multiple copies for a class.

Word Discover
Word Discover automatically connects to thousands of sources to give deep information on words. 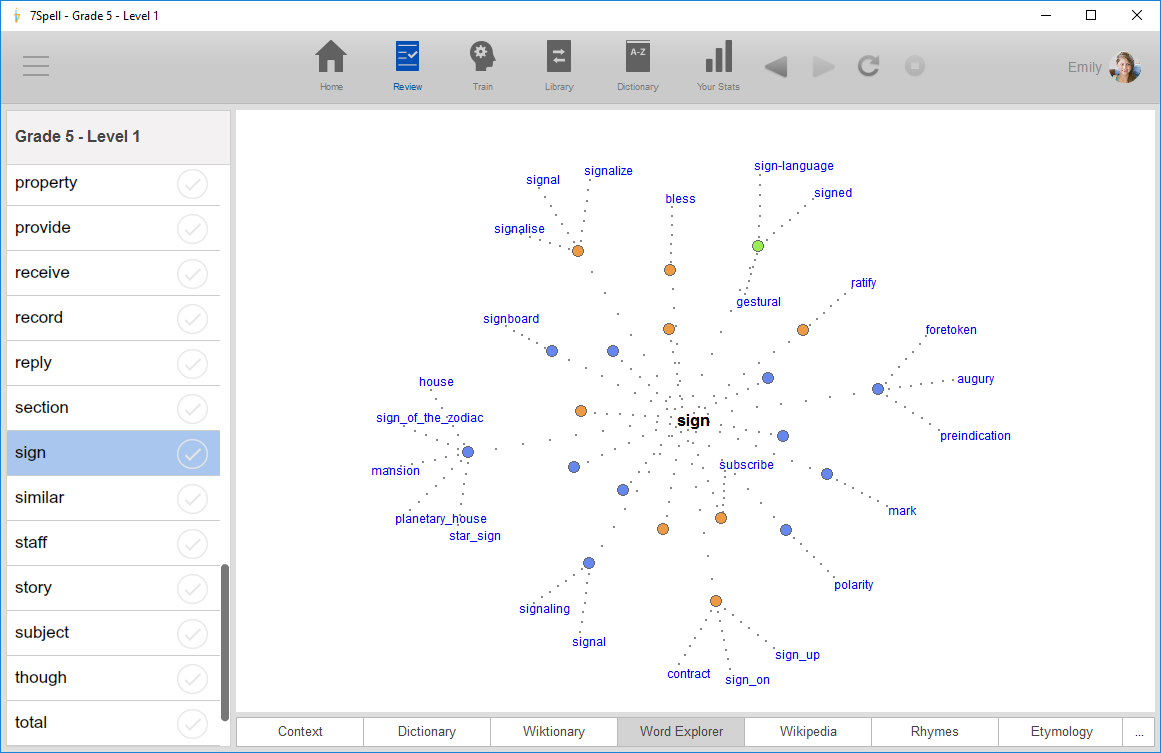 Vocabulary Building
You can also use 7spell as a powerful vocabulary tool.

Up To 5 Users. Perfect For The Whole Family.

Your 7spell access includes accounts for up to 5 users at no additional cost. Each user can install 7spell on multiple computers and has their own individual profile in the cloud. With 7spell the whole family can enjoy the benefits of amazing spelling skills together.

A Message to Parents

Can you place a price on a good education, superior literacy, and the opportunities these things will bring? To be perfectly frank, we believe that it’s impossible to place a price on a child’s literacy. This is evidenced by the billions that parents pour into education each year. For example, here are some of the things you can spend money on (other than 7spell) that can improve your child’s literacy.

Special Bonus Today Only
Get Our $60 Spelling Podcast Program FREE

This program is the PERFECT complement to your 7spell Software. You get Mp3 for 10 Audio CDs covering 3791 spelling words, designed to work in combination with 7spell Software to maximize results.

This program has sold individually for $60, but it’s yours free when you download 7spell today.

A company might promise that they’ll give you your money back if you don’t enjoy their product, but that’s the least they can do. Here’s why 7spell is different:

We want our guarantee to show you exactly how sure we are that our spelling software is the best in the market.

We’re so confident that 7spell is the product you need to help your child get better grades, improve their self-confidence, and learn to have fun learning, that we’ll put our money where our mouth is.

If you don’t see a measurable difference in spelling scores and skills after your child uses our software, we will not only give you a full refund of your money… we’ll also pay you $50!

A full refund and $50 in your pocket…you and your child have nothing to lose –
and everything to gain.

Either 7spell does everything we promise it will do,
or you make $50.

Click on the orange button below to download 7spell now
and see why we’re so willing to put our cash on the line!

A company might promise that they’ll give you your money back if you don’t enjoy their product, but that’s the least they can do. Here’s why 7spell is different:

We want our guarantee to show you exactly how sure we are that our spelling software is the best in the market.

We’re so confident that 7spell is the product you need to help your child get better grades, improve their self-confidence, and learn to have fun learning, that we’ll put our money where our mouth is.

If you don’t see a measurable difference in spelling scores and skills after your child uses our software, we will not only give you a full refund of your money… we’ll also pay you $50!

A full refund and $50 in your pocket…you and your child have nothing to lose – and everything to gain.

Either 7spell does everything we promise it will do, or you make $50.

Click on the orange button below to download 7spell now and see why we’re so willing to put our cash on the line!

How To Access 7spell In The Next Five Minutes

There is no need to wait. You can start using 7spell in just 5 minutes. We urge you to take the final step and try this powerful technology today. Your access includes 5 users, installs on unlimited computers, 10 full years of access, all for the limited-time price of just $29.95. To get started just click the orange download button below.

Within 5 minutes, you’ll receive download instructions for 7spell and your FREE bonuses.

All transactions are guaranteed to be secure and are covered by our 12 month no-questions-asked money-back guarantee.

Orders are processed via our corporate site ereflect.com which is verified and secured by GeoTrust.